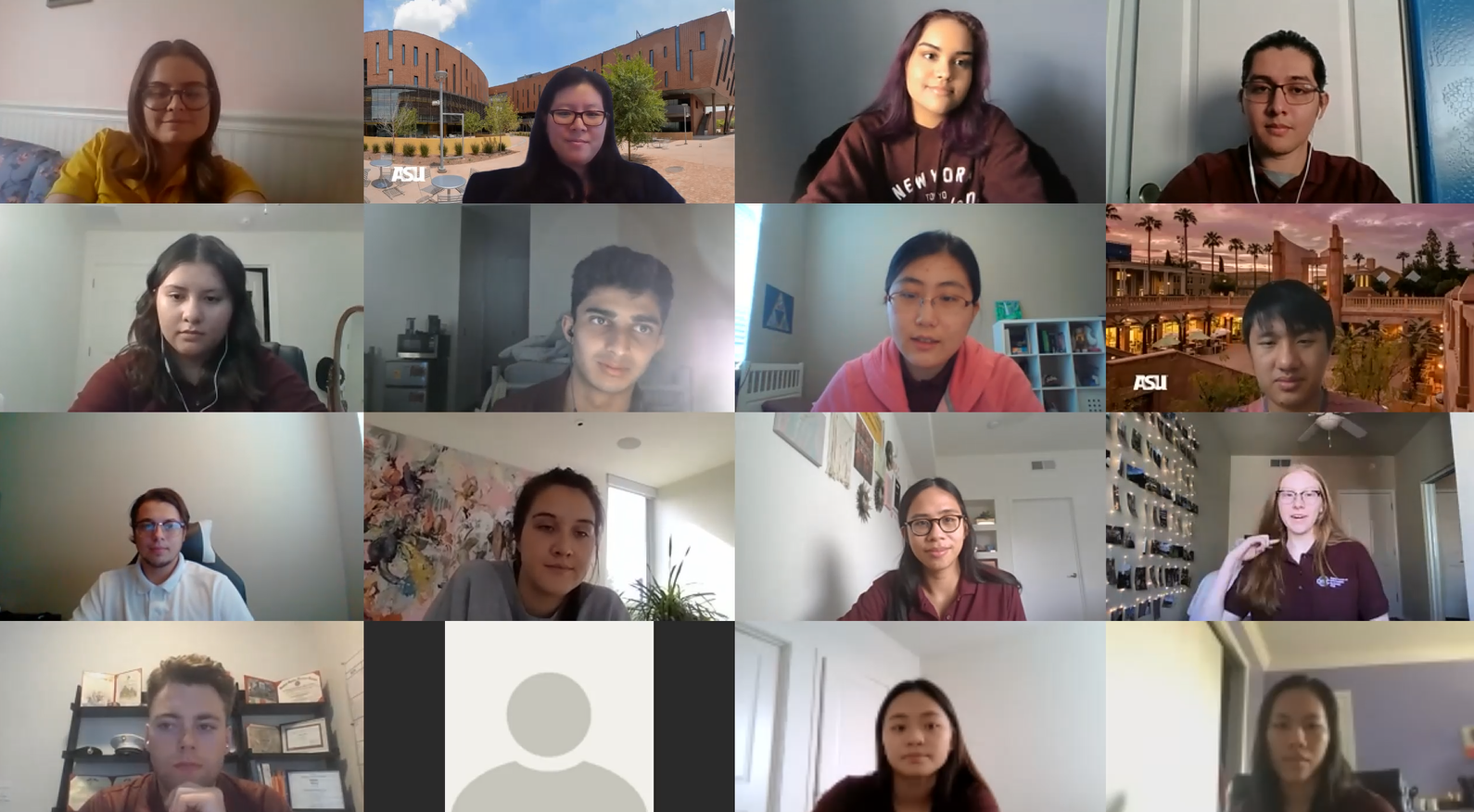 Coding must go on

Grade-school students get with the STEM programming despite COVID-19.

Grade-school students get with the STEM programming despite COVID-19.


Middle school is the perfect time to develop a passion for technology.

In years past, the Department of Information Systems Club (DISC) has invited middle school students to the ASU Tempe campus for workshops that teach concepts like coding and data analysis. The sessions are hands-on and interactive and end with a tour of the W. P. Carey buildings and campus to give middle schoolers a look at college life. This year, because of precautions to prevent COVID-19, the workshops couldn’t go on as usual.

With a spirit of perseverance and a commitment to the next generation, W. P. Carey students modified the program, recruited more student teachers, and went on with the show, virtually.

The workshops, called The Secret Code of Business, were held in November and introduced sixth-, seventh-, and eighth-graders to college degrees and career paths in science, technology, engineering, and math (STEM) within business. The W. P. Carey Department of Information Systems and DISC organize and host the outreach program for 11- to 13-year-olds.

Rather than the usual all-day workshop, the program was split into two virtual sessions — business data analytics and computer information systems. Participants joined in on Zoom for general instruction and then broke out into smaller Zoom rooms for one-on-one student-to-teacher guidance to put the practices they learned into action. Then the middle schoolers were taken on a virtual tour of the campus.

One of the challenges was figuring out how to go from a full-day, seven-hour workshop to an engaging virtual session over Zoom.

The usual activities like programming a drone and conducting a flight test wouldn’t translate well in a virtual format, Wu explains.

DISC members revamped the program to introduce kids to coding, data analysis, and other important concepts in computer information systems and business, all while keeping them engaged online. The instructors focused on smaller groups of students, asked engaging questions, and gave a good amount of encouragement, Wu says.

The workshops are led by W. P. Carey students, allowing them to gain valuable skills like teaching, public speaking, and leadership while encouraging the next generation to consider majors in technology-based business degrees.

Aira Sadiasa, a computer information systems (CIS) junior, completely redesigned the CIS portion of the event. After participating in another online event last summer, Sadiasa learned about designing and teaching programming curriculum to young student, including how to manage a virtual classroom and to anticipate what questions the students would ask.

Sadiasa, who is the DISC vice president of instruction, took that experience and created a programming curriculum for The Secret Code of Business workshop. The program introduced the middle schoolers to basic coding concepts that allowed them to create a turtle racing game using the Python programming language.

“Given that I only had two hours to teach the programming curriculum, I was surprised at how well the kids responded,” she says. “Through a lot of perseverance and communication, every student was able to create their first program.”

The virtual format brought up some unique challenges, says Sadiasa. Due to privacy restrictions, the students couldn’t share their screens with the W. P. Carey instructors when they faced a problem, but with one-on-one guidance, the students got individual instruction and each student was successful.

These experiences have given Sadiasa a passion for introducing young students to the programming possibilities within business. Sadiasa, who came to ASU as an economics major, says she was never a math whiz and was intimidated by programming. She quickly changed course after being introduced to coding in an intro to information systems course.

Higher education has given me so many wonderful opportunities that I hope many more generations after me can experience.

On the other hand, Kelly Mannenbach, the DISC vice president of community service, was introduced to STEM at an early age. With the influence of her engineer father, she developed a love for math and science in elementary school.

Mannenbach, who is a sophomore studying CIS, remembers participating in science workshops as a kid herself and knows that introducing young students to STEM education can be life-changing.

The change to the virtual format of The Secret Code of Business workshop made Mannenbach realize they would need extra help. She created a Community Service Ambassadors program to recruit more W. P. Carey students to help with the workshops. She selected seven ambassadors to help the middle schoolers during the breakout sessions. The kids talked with the ambassadors using the chat feature in Zoom and had good, thoughtful questions, Mannenbach says.

“The middle schoolers who participated were engaged in the chat feature and asked us many questions related to both what we taught them and our majors,” she says. “I remember one participant was even able to list careers that computer information systems majors can have — he had already done his research!”

The workshops were meaningful to students and got them thinking about what their future could be as a student at ASU and careers they may be interested in because of the experience.

One of the middle school students who attended The Secret Code of Business workshop says she learned how to graph and analyze the results from a game of paper, rock, scissors, and then predict the next outcome. She believes workshops like it are important for kids her age because most jobs include math and technology.

“If we learn it early on, it will be easier later,” the student said in an interview with Hoornstra.

Another middle schooler that attended the workshop, says his favorite part of it was learning the programming language and using code to design a racing turtle — everything from the shape, color, and movement of the turtle.

The workshops proved the importance of introducing STEM education to middle school students to inspire creativity, innovation, and endless possibilities — even online.

Learn more about The Secret Code of Business for your middle schooler.