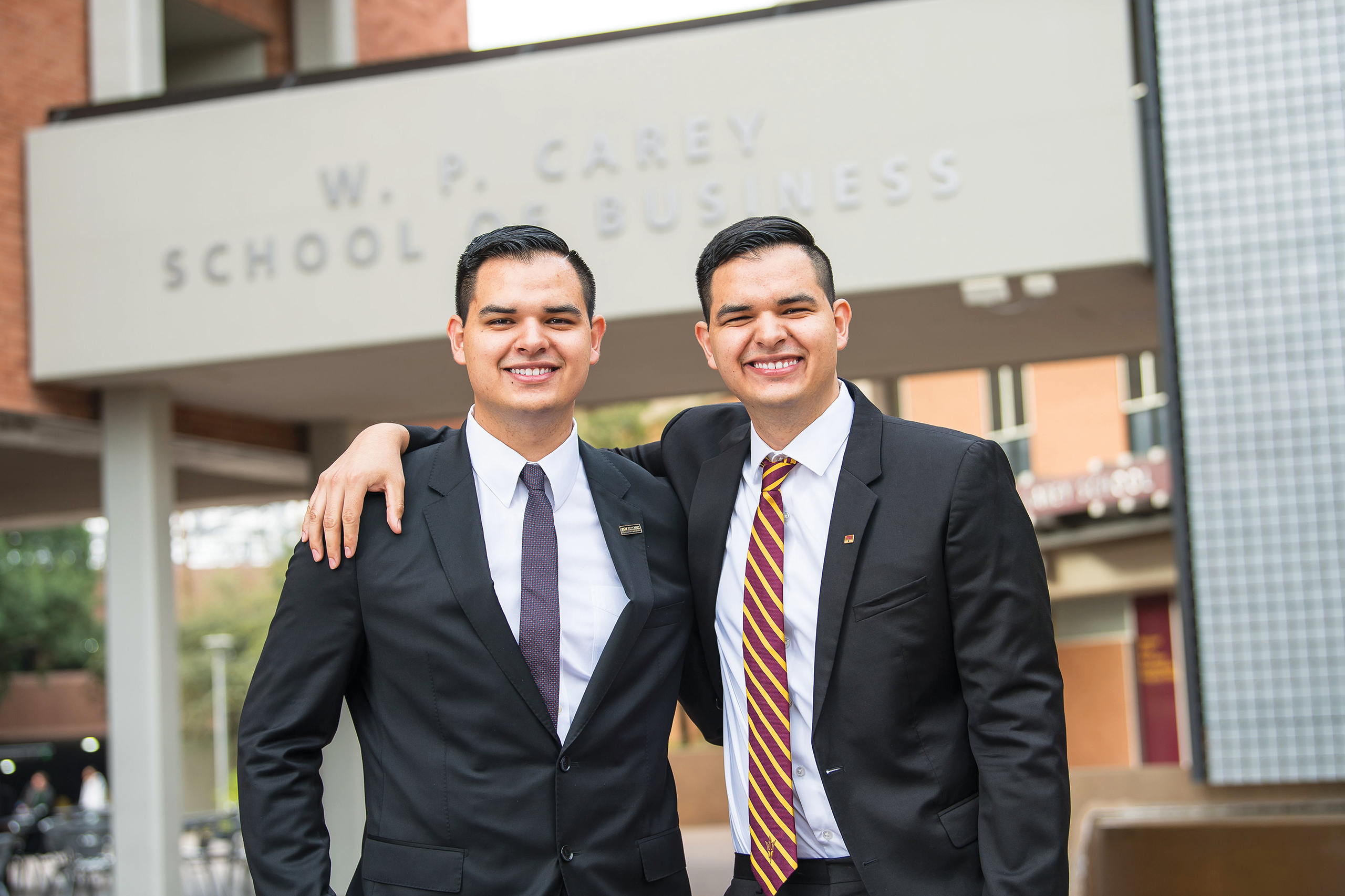 When brotherly love goes above and beyond

They did everything together growing up, and in December 2017, identical twins Homero Sosa and Gilberto Sosa graduated together, both of them winning the Turken Family Outstanding Senior Award.

Usually, the award goes to one person, but the Sosa twins' accomplishments are so outstanding, their lives and projects so intertwined, that it was impossible not to give the award to both. Just listen to the professors who recommended them:

"Homero…is probably the most impressive candidate, for any award, for whom I have written a letter of recommendation," wrote Professor of Supply Chain Management Craig Carter. "He is the type of leader and corporate citizen that every company hopes to hire."

As for Gilberto, "I can readily attest to his quantitative and analytic skills…which will undoubtedly lead him to great success," wrote Kevin Burns, senior director of strategic initiatives. "His work as the founder of Voices United to assist other students to be successful in college demonstrates his belief in the opportunity of a college education for all. Gilberto took his beliefs and turned them into action and opportunity for others," wrote Lecturer of Management Rhett Trujillo.

College was anything but a given for the twins when, at age 11, they moved with their parents from a small town in Chihuahua, Mexico, to Arizona. Their parents' visas expired, but they decided to stay. Even as children, the Sosa twins knew what that meant. "It was scary to go outside. I thought the police might take one of my brothers or my family," Gilberto says.

After graduating from high school, the twins, undocumented immigrants themselves, worked under the table at odd jobs, cleaning restaurant floors and working at a bowling alley, a warehouse, a golf course - whatever they could find. Gilberto picked up week-old copies of The Wall Street Journal lying around the golf clubhouse and read some of the books members discussed at a book club. "These people had done well for themselves - maybe there was a hint in the literature they read," he says.

After a couple of years, the twins had finally saved enough to attend community college, but every semester they struggled to pay the out-of-state tuition they owed as nonresidents. At one point, they just couldn't do it. A school counselor noticed their plight and held community fundraisers to help them.

The Sosas never forgot it. They saw many other students in the same boat as themselves, and even in their limited circumstances, decided they had to help. While working and attending school, they founded Voices United to help struggling students with expenses, holding car washes and dances to raise money. "Every penny went to scholarships for students," Gilberto says. The organization's reputation spread. An award-winning pianist gave a charity concert that raised nearly $10,000.

Other appeals were less successful. Homero asked nearly 200 artists to donate works they could sell to raise money. Almost all refused. Some, having a tough time financially themselves, were affronted by the request. But Homero persisted, and eventually found three who helped.

"It showed me the value of resilience and perseverance," Homero says. "No matter how many people have said no, it doesn't mean the next person will."

The twins transferred to ASU, both majoring in management and supply chain management and racking up stellar grades, all while keeping up with Voices United and getting involved in other volunteer work on and off campus. Homero co-founded the Biomedical 3-D Printing Club, partnering with the Rochester Institute of Technology and Google to print out next-generation prosthetic arms and legs for patients who had lost limbs. Gilberto worked as a night manager at an alcohol and drug rehabilitation center. Both helped support their parents with money they earned from their part-time jobs.

The Sosas' hard work and dedication, combined with the skills they gained in college, have obvious benefits for employers, and the twins have already tested their mettle in summer internships. At Microsoft, Gilberto found a way to save $1 million in the production and distribution of laptops, while Homero worked with senior managers to develop an innovative project management tool. At Avnet, Homero helped a $17-million client improve logistics. At Abbott Laboratories, Gilberto did statistical analysis to eliminate waste in baby formula production, saving the company nearly $2 million.

Now, with graduation upon them, the twins are faced with major decisions that may lead them to go their separate ways for the first time. Gilberto has been offered a job in a three-year leadership development program at Dell. Homero was invited to join the same program, but is leaning toward Google, where he recently interviewed to become a recruiter.

"It's not easy for our paths to diverge. He's been my companion and my best friend, but he has to do what's best for him," Gilberto says of his brother.

No matter what happens, the two will stay in constant contact. "We can fly to see each other on weekends. Where there's a will, there's a way, and I'm sure we will find a way," Homero says.

Though they may live in separate cities, the twins have the same long-term agenda: Work for a few years, get an MBA, build a career, and give back to the community by doing something that has a positive impact on people's lives.

Even with all the awards and accolades they've received, the success the twins have had in helping people has affected them the most, like the Iranian woman who couldn't afford community college tuition. She had a child and had escaped from an abusive relationship. If she didn't re-enroll, both could have been deported. Voices United helped pay her tuition.

"It was less than a thousand dollars, but it changed her life," Homero says. "She was crying. I can still close my eyes and see her face. That's what I think impact is."