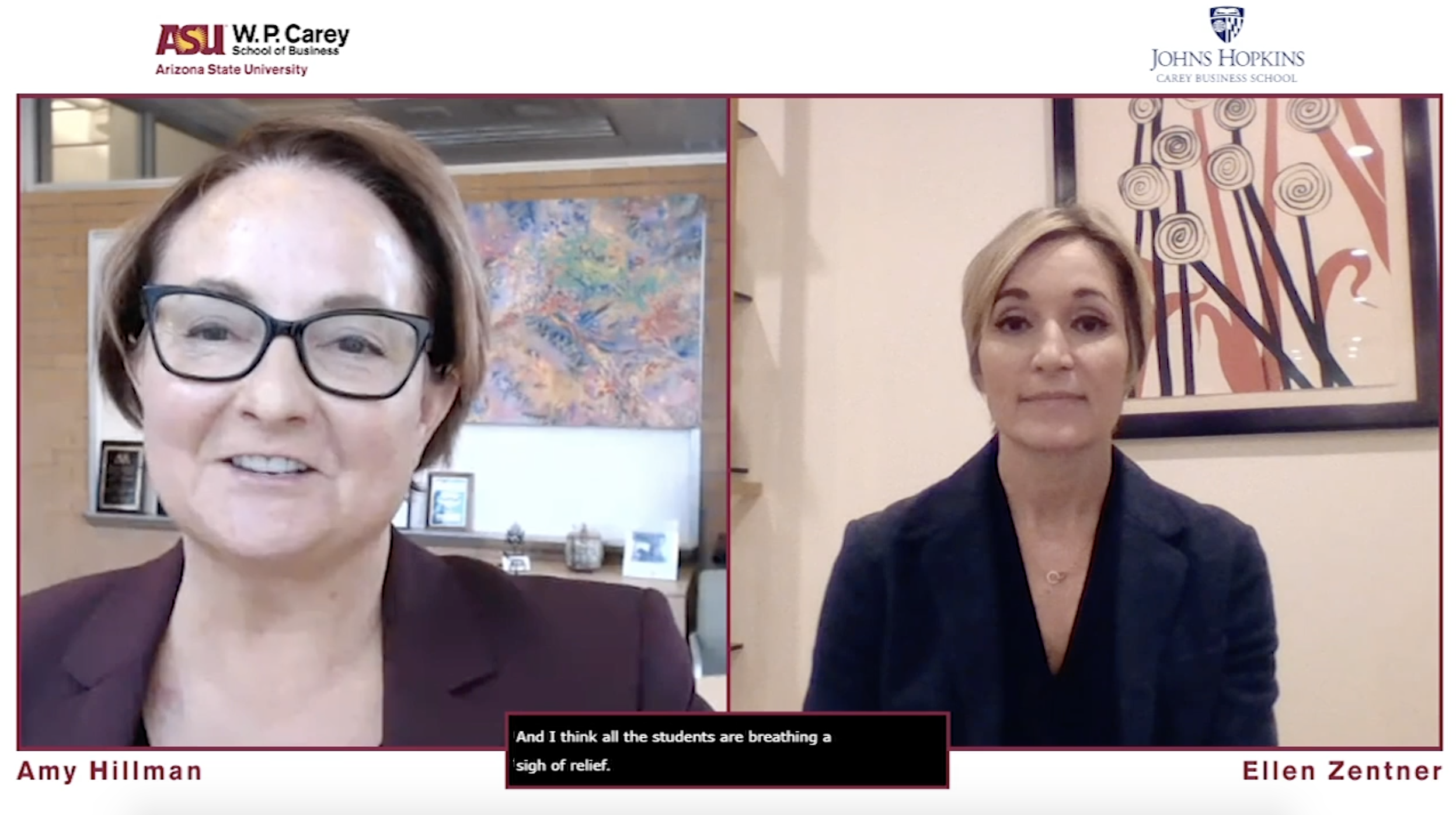 Ellen Zentner, chief U.S. economist of Morgan Stanley, delivered her 2021 predictions at a virtual event in her honor for winning the Lawrence R. Klein Award, regarded as one of the best-known and longest-standing achievements in the field.

The economist with the most accurate forecasts — four years in a row — is “encouraged by what we’ve seen this year in terms of households doing a good job of self-policing, finding safe ways to engage more fully in economic activity, and we think that will endure,” said Ellen Zentner, chief U.S. economist of Morgan Stanley.

The evolution of COVID-19 is going to be a key determinant in what happens in 2021, according to Zentner and her Morgan Stanley team. They expect the second wave of infections, a vaccine that’s broadly disseminated beginning in March, and the expiration of certain parts of the fiscal stimulus to have important implications for economic growth. The election and fiscal policy will also have significant effects on the economy.

Zentner delivered her 2021 predictions at a virtual event in her honor for winning the Lawrence R. Klein Award, regarded as one of the best-known and longest-standing achievements in the field. She joins four economists who have won the award twice in the more than 40 years of forecast accuracy winners.

How the pandemic may play out in 2021

Zentner sees growth as slowing in the fourth quarter compared with the third.

“We had an incredible tailwind coming out of lockdown,” she said. “We’ve all been living through this very difficult time of COVID-19, but at a time when the days were getting longer and we had more sun and the kids could go out to play.

Now we're going to be moving through this at a time when we’re forced, in many parts of the country, to go back indoors. It will be interesting to see how we deal with that from a psychological perspective as well as an economic-activity perspective.

Morgan Stanley biotech analysts believe a vaccine will begin broad dissemination in March, and this points to households that will pick up activity in anticipation of it.

“State governments and local governments will expand the allowed activity, increase capacity for those high-density service areas of the economy post-vaccine,” Zentner said. “Structurally, we’ll continue along this path of opening up the economy.”

Still, COVID-19 and the evolution of it remain a significant risk to the economy and the outlook in general, she said.

“As we opened up post-lockdown, the tailwinds from that are very pronounced. Oftentimes, there can be other things going on in the economy that we can’t see,” she said. “It’s pretty powerful when you’re bringing back a few million people to the labor market each month.”

How do we build public policy into a 2021 forecast when we don't know the election outcome?

Scenario analysis is important because as we saw after the 2016 election, very big surprises are possible.

Scenario analysis allows economists and clients to switch quickly to the prevailing scenario.

Zentner said that under any of the scenarios she sees deficits rising, and some of that is the COVID-related spending that will be necessary.

“We've dug through the data and think that when you go back to the original CARES [Coronavirus Aid, Relief, and Economic Security] Act earlier this year, it was much larger in terms of impact on the economy with much longer tails in terms of how long it could impact the economy,” said Zentner.

The CARES Act results are coming through as excess savings rate that households are drawing upon now to fund spending.

We think that even after the expiration of these benefits, households can float for another three to five months by drawing down the savings rate.

“That’s not going to last forever,” Zentner continued, “and this does not mean that we’re standing completely on our own and we don’t need further financial support. We need further fiscal support. But it means we’re not likely to see a decline in growth in the fourth quarter as those policies have been allowed to expire.”

The U.S. is still experiencing an 8% unemployment rate. While it’s sharply lower than the early months of COVID-19, it is still a high rate of unemployment that requires further fiscal support.

“We believe that we’re getting no further fiscal support before the election, but this is something that Congress will quickly turn to after the election,” she said, “if not to fix some of the deeply rooted wrongs that we’ve uncovered post-financial crisis and during COVID-19 with the inequities that continue to exist in the U.S.”

As we’ve done during COVID-19, Zentner said the U.S. may consider making employment benefits a permanent part of its toolkit when we’re battling these severe downturns in the future.

Because aggregate demand dropped, the economy experienced a disinflationary shock, said Zentner, but she expects the disinflation will prove temporary.

“We have to recognize that coming out of lockdown, some of the severe price distortions that we saw are now unwinding and for four straight months we’ve seen inflation running ahead of expectations,” she said. “This is in line with our view that inflation would be higher at the end of the year.”

In 2022, Zentner expects core measures of inflation will continue to rise. As we move past a vaccine, more services will open up in the economy, but it’s going to take time for supply to come back online.

“These supply constraints are likely to create upward pressure on inflation,” said Zentner, “so we think inflation continues to rise next year. And in fact, it’s been a strong view of Morgan Stanley Research that we will be moving into a higher inflationary environment in the future compared with the past. Among key factors contributing to higher inflation over the longer run is the coordinated fiscal and monetary policy response seen thus far in this downturn, which we think will get woven into the institutional framework for how we respond to severe downturns in the future. Ever-larger deficits and Fed balance sheet will be inflationary.”

Zentner and her Morgan Stanley team also think a slow turn toward deglobalization will reverse decades of downward pressure on inflation.

Globalization pushed down inflation over the past decade or two, but we shouldn’t be complacent that it will continue to hold back inflation going forward.

Zentner also believes there’s a role for fiscal policy to play. She said there will be much more fiscal policy activism going forward. “Think of the government taking control of a battle for better equality, and that’s going to mean fiscal policy activism geared toward raising the labor share of profits. These are all inflationary.” Zentner added that it’s something she and her team will focus on well beyond next year.

What is there for the Fed to do here? If inflation is rising, should the Fed raise interest rates to battle against rising inflation?

“We do not expect any changes to the interest rate path,” said Zentner. “We don’t expect changes to the Fed’s asset purchase program. There’s nothing for the Fed to do here. In their words, as long as financial conditions remain easy, very supportive of the outlook, then that is the best the Fed can do to try to help the economy strengthen and get back to that pre-COVID-19 level for the unemployment rate as fast as humanly possible — all the while being willing to withstand higher inflation in the name of it getting a faster return to whatever this new normal is on the other side of COVID-19. Monetary policy is on hold here for as far as the eye can see.”


For more information about the Economic Club of Phoenix (ECP) or to register for an upcoming virtual event, visit econclubphx.org or call 480-727-0596.

Top image, from left: W. P. Carey School of Business Dean Amy Hillman moderates the keynote presentation by Ellen Zentner, chief U.S. economist of Morgan Stanley, who delivers her 2021 predictions at a virtual event in her honor for winning the Lawrence R. Klein Award for the second time.