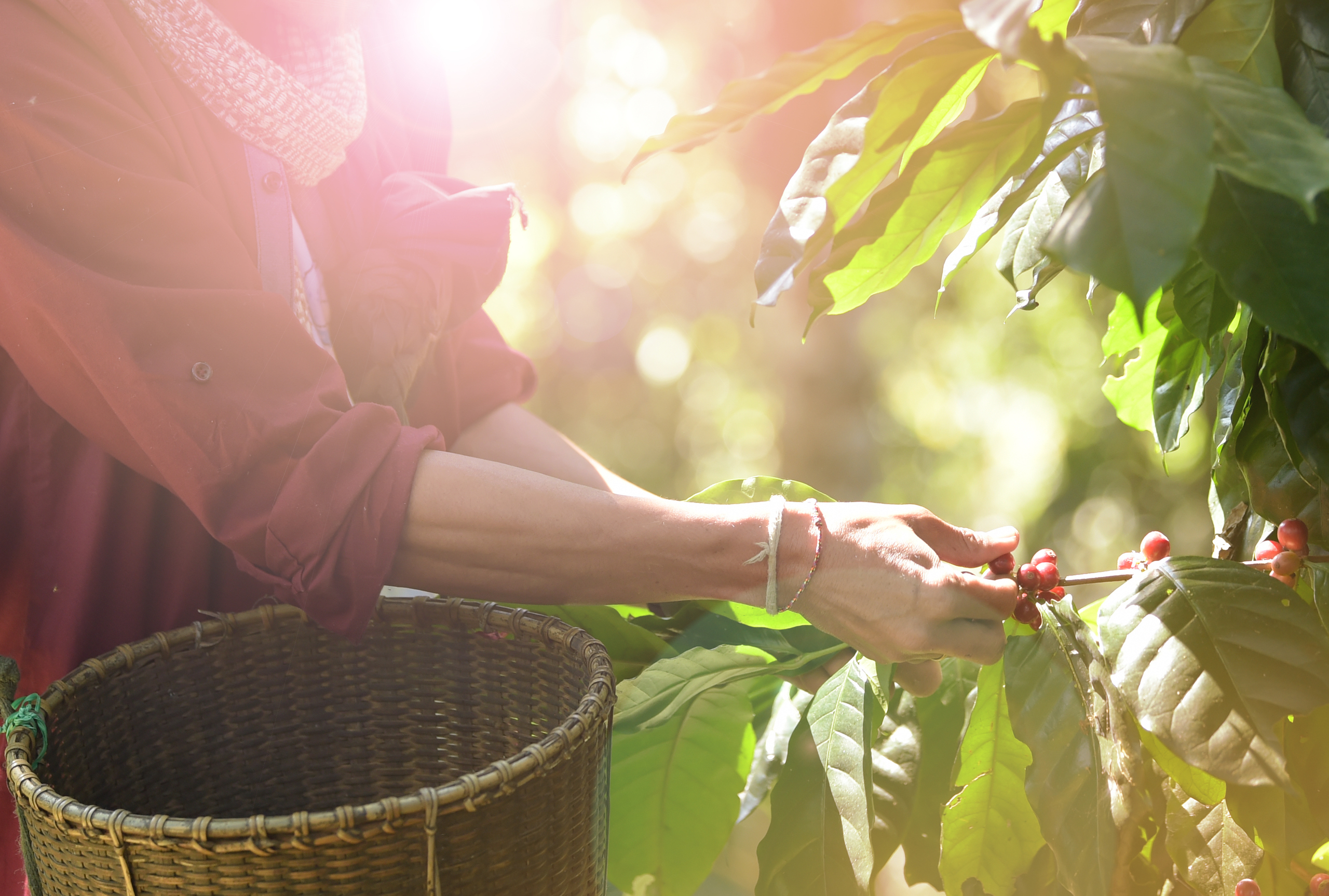 Are consumers willing to pay more for sustainably grown coffee? And if so, why? New research found that people’s motivations for being willing to pay more were mixed, but buying a sustainable product because it makes them feel good about themselves was the surprise front-runner.
By Jenn Woolson
2022-10-10

A cup of coffee might be just what you need to get your brain fired up in the morning. For Katherine Fuller, a PhD student in the Morrison School of Agribusiness, thinking about coffee got a bigger idea percolating: Are consumers willing to pay more for sustainably grown coffee? And if so, why? She tackled the question as part of her dissertation with the help of ASU researchers Carola Grebitus, associate professor and Dean's Council Distinguished Scholar, and Troy Schmitz, professor and director of the Morrison School of Agribusiness. Their findings were published in “The effects of values and information on the willingness to pay for sustainability credence attributes for coffee” in Agricultural Economics, the journal of the International Association of Agricultural Economists.

Besides loving coffee and drinking it every morning, Fuller, who is originally from Colombia was acutely aware of the problems that farmers in developing countries like hers were facing. She was curious about how the interaction of different disciplines including psychology, economics, and sociology could influence policies that could potentially help them.

“Coffee farmers have to go through stringent processes and get certified to produce coffee that can carry a sustainability label,” she explains. “If there's not a market that will pay a premium for that effort, then they are losing money and time.”

Higher prices are a perk of coffee labeled for sustainability

To test consumers’ willingness to pay (WTP) a premium for sustainable coffee, the researchers conducted an experimental auction where participants were asked to bid on coffee labeled for Fair Trade, USDA Organic, a combination of Fair Trade and USDA Organic, Rainforest Alliance, or Direct Trade. The participants were then asked a series of questions to evaluate whether they were motivated by egoistic values (reflecting self-interest), altruistic values (emphasizing the welfare of others), or biospheric values (relating to concern for the environment).

“The different attributes were chosen to test what's most important to consumers in terms of sustainability,” Grebitus explains. Do they care most that the people producing the coffee are paid a fair wage? Are they most concerned about the environment? Or do they simply like that buying a sustainable product makes them feel good about themselves — a motivation researchers call “the warm glow effect.”

What they found was that people’s motivations for being willing to pay more were mixed, but that the warm glow was the surprise front-runner.

“We were expecting that people with a biospheric motivation, indicating that someone is concerned about the environment, would be more interested in paying more for labels such as Rainforest Alliance,” Fuller says. "But we didn't find that. We found that people with the warm glow effect of giving were willing to pay the most for Fair Trade and Direct Trade coffee.”

After the first round of bidding, participants were provided with informational sheets explaining the meaning behind each label and were then asked to bid again. Overall, WTP jumped in every category. The difference between the first round and second round WTP was $.57 for Fair Trade, $.42 for Fair Trade + Organic, $.37 for Rainforest Alliance, $.36 for Direct Trade, and $.004 for Organic coffee. Those whose primary motivation was the warm glow effect from the purchase were willing to pay even more for Fair Trade and Direct Trade coffee.

That leads to the question of what coffee farmers in Colombia, Ecuador, and other developing countries can do to help consumers become better educated about these labels.

Most people have seen these labels on food products like coffee, Fuller says, but they often don't know about the certification process behind them. She suggests QR codes on the package or educational labels in coffee shops that provide information about the farmers and country of origin could make consumers more aware of the struggles that farmers face — and motivate them to pay a higher price. And because the warm glow motivation is so powerful, it would be most beneficial for the promotional label language to focus more on altruism and less on self-benefit in order to increase WTP.

This idea of information affecting motivations applies to so much more than just coffee. Non-profits and social causes of all sorts should take note, Grebitus says.

If there’s an organization that is doing good, we must make sure that consumers are aware of that. Because once they know, they are often willing to pay or give more — and that is what we want to foster, especially when it comes to sustainability.

Fuller believes that researching sustainability issues across disciplines is making a valuable contribution to science. For her, that goes beyond environmental issues and extends to the social aspects of sustainability, such as how people are affected by working conditions, the inclusion of women in production processes, and child labor. She adds that research that doesn’t just focus on one field but invites other fields to contribute can help create and advance policies that address many types of social issues.