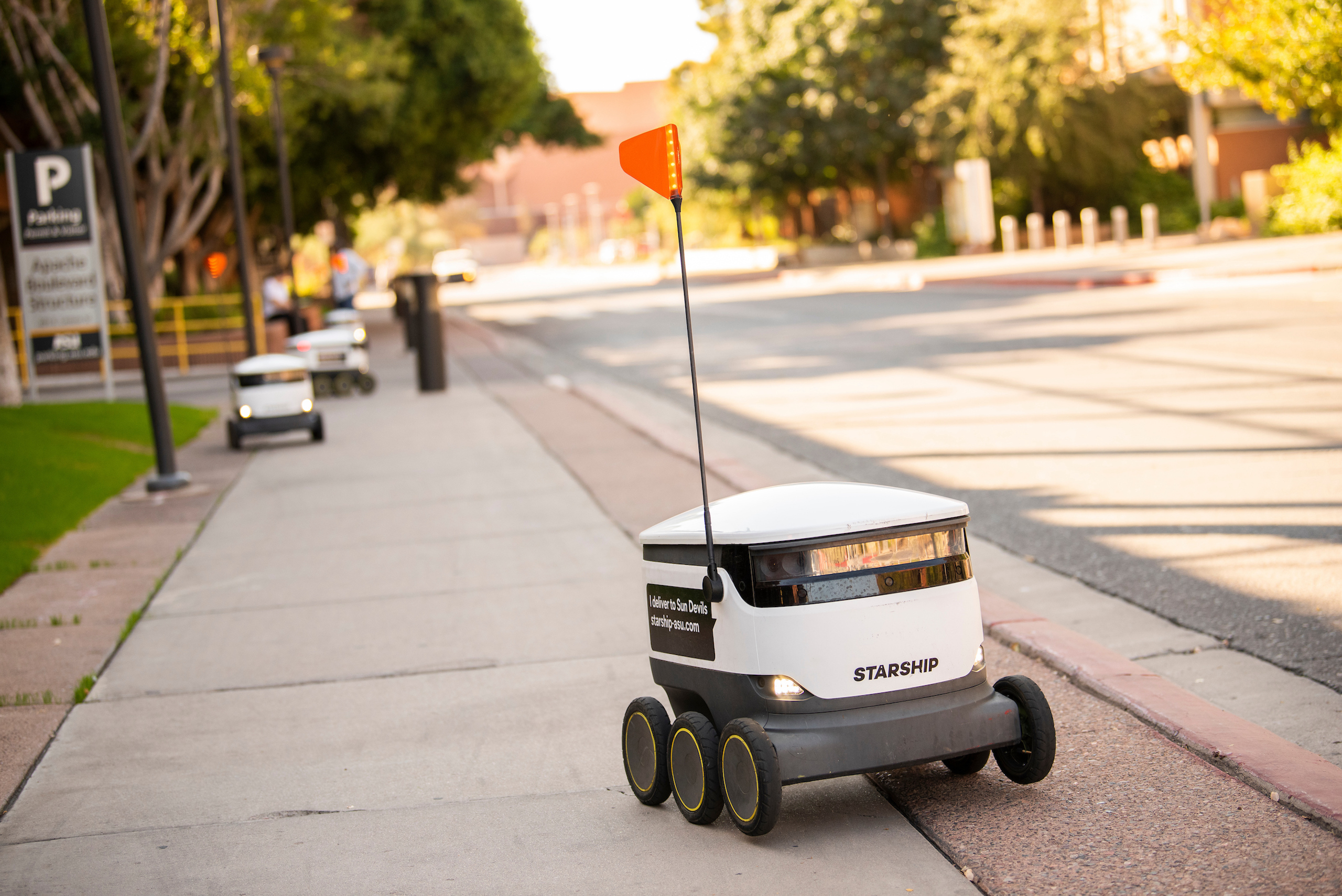 While the use of robotics in business has been steadily growing across industries, not many in academia are devoting research time to ways in which robots can improve business.

While the use of robotics in business has been steadily growing across industries, not many in academia are devoting research time to ways in which robots can improve business.

The W. P. Carey School of Business is leading the way for robotics in business research, thanks to a student-led group, the Robodevils.

“When we look at academia, very few business schools have shifted focus to this topic. We’re one of the first ones,” says Victor Benjamin, assistant professor of information systems and co-director of the Actionable Analytics Lab, which houses the Robodevils.

The group was formed out of an idea from Kylel Scott, an Ira A. Fulton Schools of Engineering graduate student who earned an applied business data analytics certificate in 2021 through W. P. Carey. He reached out to Benjamin for assistance with his honor’s thesis and the two discovered this untapped research area. Word spread to other students and the Robodevils were born.

“It’s an effort to lower the barrier to entry into robotic development by introducing it in a business mindset,” Scott says.

Most everyone in the group points to Transformers, the toy action figures, as the beginning of their interest in robotics. Past that, the group members come from different backgrounds, schools, and fields of study. Their diverse disciplines complement each other and the team, Scott says.

The group will study collaborative robotics or robotics, which is the integration of robots into society. Measuring the impact of that effort is where business will come in, Scott says.

Freshman Anisha Hossain was on her high school robotics team and was intrigued when she saw a digital flyer recruiting members for the Robodevils. For Hossain, a Fulton Engineering School computer science major, looking at robotics through a business lens has opened her eyes to a new world of possibilities.

“I’m specifically interested in human-robot interactions,” says Hossain. “It’s not something I thought about before.” Hossain plans to focus her honor’s thesis on the work she does with the Robodevils.

The Robodevils are currently focusing on collecting data on the Starship food delivery robots at ASU and how they interact with humans. Student researchers are taking videos and notes to see how the robots are impacting pedestrian and vehicular traffic around the ASU Tempe campus.

The campus has become a testing ground. This isn’t happening in many other places.

Already they’ve seen wheelchair ramps can be a problem for the robots. The ramps aren’t wide enough and don’t support the high traffic. The robots monopolize the ramps, sometimes getting stuck and often causing traffic jams.

The researchers’ video footage has shown the robots going rogue at times, accidentally running over a pedestrian’s foot, throwing a skateboarder off balance, or forcing a biker to slam on the brakes or swerve to miss a robot.

“We’re already seeing that, unfortunately, they do have an impact on human mobility that doesn't look very good,” Benjamin says.

A possible solution might be more visible brake lights on the Starship robots, he says. The robots are useful and welcome, but design changes could make them more compatible with the people around them.

Knowing if your robot upsets the people it interacts with is valuable information. Companies could use that data to measure and improve their robotic systems, develop better solutions, and positively impact society.

The Robodevils will work to create a set of computational tools to collect, store, and analyze the data. Their goal is to produce tangible results that they can share at conferences and in publications.

Robodevils member Ethan Clark has been on the receiving end of a wayward Starship, his foot has been run over. The computer science senior joined the group to further his interests in robotics and artificial intelligence. He plans to continue his education, reach the doctorate level, and become an AI researcher.

The variety of backgrounds and experiences in the Robodevils give the group a unique ability to see all angles of an issue — from computer science and engineering to information systems and social sciences.

The Starship robots aren’t the only robots on campus. Basic cleaning of the Memorial Union is done by robots at night. Robotic systems can be more consistent and reliable, says Robodevils member Greeshma Challaram.

Challaram, a computer science senior, said the relationship between engineering and business is complementary in an industry setting as well. Engineering is based on practical outputs and innovation, while the business side can provide data analysis and direction.

“There’s a big future where engineering and business will collide and create better things,” she says. The opportunities to incorporate robotics into society are limitless, says Robodevil Isaac Felix, a mechanical engineering junior. Processes can be improved, made safer and more productive with robotics use.

“There is still a lot of things we have to learn and improve, but I believe the future looks good as our technology continues to grow,” Felix says. “I hope it’s for the greater good of everyone.”

Using robots in business operations isn’t new. The manufacturing and automotive industries have used robotic systems for decades. Recently, partially due to the global pandemic, other industries are using robots to improve business performance.

An early 2021 report by the Robotic Industries Association states that in 2020, for the first time, yearly robot orders placed from non-automotive companies surpassed automotive robot orders.

According to the report, the following industries are seeing a surge in robotics use:

1. Life sciences and pharmaceutical — Due to the global pandemic, the industry had to rapidly change its processes and automate many of its production systems to maintain social distancing guidelines.
2. Food and consumer goods — This industry has been steadily growing in its use of robotics in the past several years. Automation is being used in manufacturing, packaging, and logistics.
3. Plastics and rubber — This industry saw a 51% year-over-year growth in new robot orders. Increased demand for packaging and consumer goods and pressure to reduce the environmental impact of plastics have encouraged the industry to innovate and incorporate robotics.
4. Automotive — The automotive industry has been at the forefront of robotics use and that continues to grow. Robots are proving to be useful for accuracy and consistency, not just for their productivity.
5. Semiconductors, electronics, and photonics — The increased product demand in this industry has led companies to turn to robotic systems for manufacturing.
6. Metals — Despite setbacks due to the pandemic, companies in this industry began using robots in their operations to innovate and find new ways to operate.

The National Science Foundation (NSF) has put out solicitations and offered research grants for studies focused on the impact robots make on society. It’s external validation that the Robodevils’ research stream is significant, Benjamin says.

The Robodevils have partnered with Erin Chiou, assistant professor of human systems engineering in the Polytechnic School, which is part of the Fulton Schools of Engineering, to present their findings to the NSF.

Chiou says the next question in robotics is what happens when the work becomes less mechanized, when robots and humans will need to directly interact?

It’s more about coordinating between complicated systems. Maybe more intelligent robotics that could interact with humans, could play a role in sustaining those systems.

The Robodevils will work to answer that question. They’re looking for more bright minds to help their efforts. For more information, reach Benjamin at victor.benjamin@asu.edu.